Showcase of TENGGER's live performance at Studio Kyurt where is their self-studio,
they have done DIY renovation about 6 years. 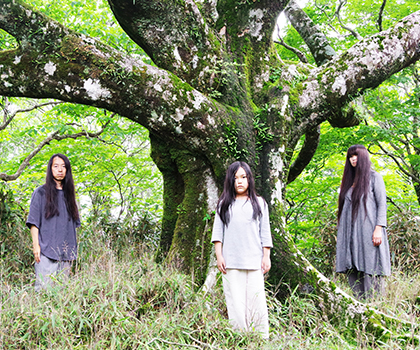 TENGGER is a traveling musical family from Seoul, Korea. made up of Pan-Asian couple, itta (from South Korea) and Marqido (from Japan), who create their brand of psychedelic New-Age drone magic through the use of Indian harmonium, voice (played by itta) and analogue synths (played by Marqido). The duo originally started out with the moniker "10" but since the birth of their son RAAI (who joins them on tour with playing toy instrument and dancing on stage) in 2012, have called themselves TENGGER (meaning 'unlimited expanse of sky' in Mongolian) to mark the expansion of the family. It also means 'huge sea' in Hungarian. Travel, as spiritual experience in real environments, and the sound between the space and the audience have been central themes of their works. The family's yearly pilgrimages inform every aspect of their art.

"TENGGER was the most magical of all the performances I watched."
Bob Boilen, NPR All Songs Considered, 30 March, 2021

"...it's clear and bright, fed by the deep wells of feeling TENGGER have drawn from the natural world."
Marty Sartini Garner, Pitchfork, 12 June, 2020

"From field recordings to Krautrock to something they call 'aural hang-gliding', TENGGER have truly begun to put their stamp on psychedelic music."
Cam Lindsay, Bandcamp Daily, 11 June, 2020

"...like stepping through a glowing portal and gasping at the wonders of another world"
Chris Deville, Stereogum, 10 March, 2020