As you listen to the music of Landscape, may you reflect on the landscapes that lay before each one of you.
Whether they are fantastic and joyful or desolate and dismal, may hope always be on the horizon.

The complex and energetic performances of Kim So Ra’s 2nd album Landscape (2021) are more expressive and less restrained. She aims to present the distinct rhythms and timbres of traditional percussion, changed yet unchanged, in a more modern and sophisticated format. Pungmul and Shamanic rhythms have been passed down for generations across Korea’s eight provinces. Through contemporary reimaginings of those traditional patterns and the expression of joy and release in her music, Kim aims to create a sort of ritual in which we can all take part in and find comfort. In the deep and boundless realm of Korean rhythms, there is endless variety. With the addition of the thick and raspy tones of the piri, the taepyeongso, and the saenghwang, Kim aims to provide immersive performances with a deep harmony between the performers that goes down to the breath. As you listen to the music of Landscape, may you reflect on the landscapes that lay before each one of you. Whether they are fantastic and joyful or desolate and dismal, may hope always be on the horizon. 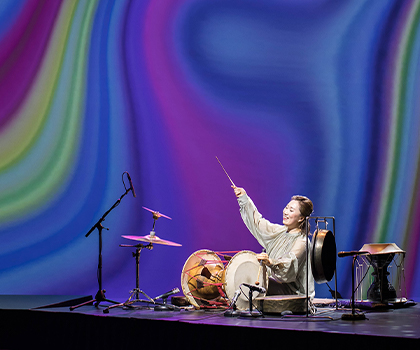 Korean percussionist, performance artist, world musician, and producer Kim So Ra is celebrated for her uninhibited, boundary-crossing activities in the World Music scene. After the release of her 1st album A Sign of Rain in 2018, she successfully debuted in Europe and North America as an official showcase artist at the world’s biggest music exposition WOMEX 2018 and North American World Music Summit Mundial Montreal, respectively. In 2019, her first album A Sign of Rain was nominated for Korean Music Awards Best Jazz & Crossover Album. During her solo world tour, Kim was invited to reputable venues and festivals in 24 cities across 7 different countries in Europe, North America and Oceania. In order to play and perform more freely with Korean rhythms, Kim has participated in numerous collaborations and projects, ultimately forming a genre of her own. She is on a continuous journey to explore the outer limits of Korean drumming, Korean performing arts, and world music at large to make new music that is both familiar yet distinctly hers.

"WOMAD always produces surprises each year and one of the stars of the festival this year is South Korean percussionist Kim So Ra."
Music OMH by Steven Johnson/ 2019.8.1

"Her instrument is the janggu, a double-headed drum played with two lithe wooden sticks. In her solos, her arms are a blur as they speed from one end of the drum to the other. The mistiming of a few microseconds would be disastrous."
Standard Simon Broughton 2019.7.29